“Well paced and extremely entertaining. The singing is first rate and it’s quite funny.” - talkentertainment.com

I've Got a little Twist

I’ve Got a Little Twist is an award winning, NYGASP original production that highlights the timelessness of Gilbert & Sullivan and its relevance in today’s world. The show accomplishes this in several ways- numbers feature ingeniously rewritten lyrics for G&S tunes, G&S numbers are juxtaposed with more modern musical theatre, and, sometimes, the classic Gilbert & Sullivan is left in tact and allowed to speak for itself.

The show simultaneously speaks to audiences who are new to Gilbert & Sullivan as well as die-hard aficionados. It features an MC who interacts with a soprano, an alto, a tenor, a comic baritone, and a bass in a clever mash-up of scenes and songs created specifically for some of NYGASP’s best performers. Each actor tells his or her own story, and the penultimate number, “The Legacy of Patter”, celebrates the way in which this tongue-twisting art form has been “used and infused into Broadway shows for years”. Audiences are treated to song and dance, beautiful ensemble singing, and laugh-out-loud comedy, while leaving the theatre with an intimate knowledge of what famous 20th-century lyricist Johnny Mercer said: “We all come from Gilbert.” 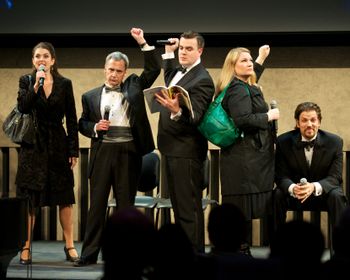 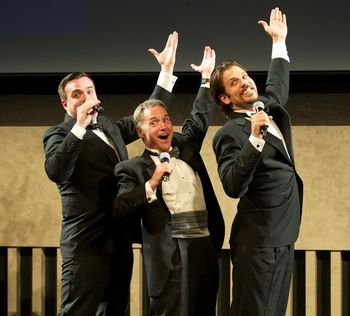 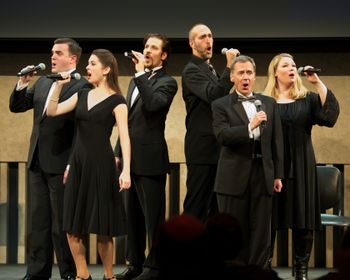 Now in its forty-eighth year of operation, New York Gilbert & Sullivan Players (NYGASP) is America’s preeminent professional Gilbert & Sullivan repertory ensemble.  Under the dynamic leadership of Artistic Director Albert Bergeret, who has been hailed as “the leading custodian of the G&S classics” by New York Magazine, NYGASP has created its own special niche in the cultural mosaic of New York City and the nation.  Since its founding in 1974, the company has presented over 2,500 performances of the G&S masterpieces throughout the United States, Canada, and the U.K. captivating audiences of all ages.

The company has in its repertory thirteen different complete G&S operas (cast, orchestra and crew of 50-80 people), special versions of the most popular operas designed for children’s audiences, and a variety of charming concert programs created especially for NYGASP’s “Wand’ring Minstrels” ensemble. The company has also produced a unique cabaret act.  I’ve Got a Little Twist, created and directed by David Auxier, won a 2010 Bistro Award, is currently touring throughout the country, and appeared at Lincoln Center’s 2011 Atrium series.  “Take Gilbert & Sullivan, add a TWIST of Broadway, and stir!” is Twist’s recipe.  Highlighting Musical Theatre’s roots in Gilbert & Sullivan, the show is entertaining for all ages.

The company’s celebrated ensemble of G&S experts, developed by introducing new singers each year from New York’s immense pool of vocal and theatrical talent, has collaborated with such guest artists as world-renowned G&S exponent the late John Reed, O.B.E. in numerous comic baritone roles, Tony winner John Rubinstein and Frank Gorshin both as King Gama in Princess Ida, John Astin as Sir Joseph in H.M.S. Pinafore, Hal Linden and Noel Harrison as the Major General in The Pirates of Penzance, Pat Carroll as Little Buttercup in H.M.S. Pinafore, and Steve Allen as The Mikado.